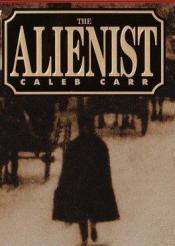 When I first meet the Alienist it was in the form of previews for the Netflix show that was running on TNT. I thought to myself: Looks good. Victorian. Creepy. Good cast. Good looking sets. And no doubt in 4k too. So I have yet to see the series, but I decided to pick up the book. I am arriving at the conclusion that I am no longer reading this book because I enjoy it, but because I have sunk enough time into it so I may as well finish it. Alright, don’t get me wrong, it is a page turner and the time flies when I am reading it, but I just have way too many problems with it to completely suspend my belief and immerse myself into the world of the book. If you don’t want to read through a post where I complain about things, turn back now. If you do, then without any more delay let me jump right into the three things that stood out to me the most while I have been reading The Alienist: First, considering this book’s premise is deductive psychological work being used to find a killer it is really fishy that the big break comes from a random occurrence. This is usually a sign that the author did not know how to believably move the story forward with the chosen method. It is a gimmick, as if fate, or in this case the author, had decided to toss the detectives a bone. And when the author needs to go about setting things up, just so that the protagonist could get a random piece of information that just points to the killer like a giant billboard sized arrow you know that you have a problem with your logic. There is an attempt to make it sound like they were using their skills to decide if this was a real break, by contacting their detective friends, but those detective friends gave no reason why they thought this specific piece of data was important. So in essence neither the location of the break nor the subsequent justification for the break being deemed valid, has much to do with serious deducting work we were previously exposed to. Second, and this may be because this topic has been a popular one on some of the places I get my book news, is violence against women. We have two prominent female characters and both of them have a history of sexual abuse, and one is even killed to push a male protagonist’s story forward. I have written about my dislike of Sara being a strange emotionally volatile character that jumps to anger if her gender is insulted, but what is her real purpose in the narrative? This becomes more of a problem when she offers advice to Lazlo. Lazlo said he wanted her ‘female perspective’ yet he ignores the information she provides. And the other woman is a love interest that is later killed for the sake of dramatic value. Are the female characters in this book independent individuals or stage decorations for the men who are the real actors? I would say that it is the latter. Which is very unfortunate. Third, although this is tightly tied with the previous section, is the treatment of side characters who are women. I won’t speak of the mother of one of the victims or the madam at one of the whorehouses, but I will point out the mother of our murderer. There is a very long info dump on the abuse that the killer experienced from his mother when he was a child. This is the the abuse that had made him the monster that he is. It is the driving force behind his actions. And you could argue that it is use in part as justification. Yet the abuse that the mother suffered at the hands of her husband, is swept under the rug. If we are supposed to feel empathy towards the killer, because he was denied a human upbringing, where is the call for empathy for his mother? You won’t find it. At this point I am certain that I will not continue the series. The bottom line is that what I wanted from this book has turned out to be stage decorations, rather than the main focus, and I really do not care to read any more stories set in this world. There are other authors I want to try, and be disappointed by. ~XO
Kaydence At A Glance